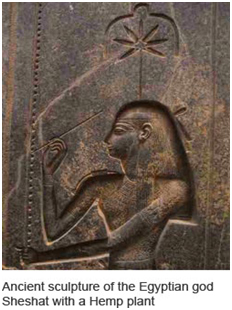 Every major civilization in history has recorded Hemp as #1 on its list of important plants. The ancient Chinese, Indians, Egyptians, Assyrians, Persians, Greeks and Romans all revered it as an incomparable source of food and medicine.

We are hard-wired with a system of Cannabinoid receptors throughout our brain and body. When these receptors are activated they permit 2-way communication between body systems, something that the science had previously thought was impossible.

This system is called the Endocannabinoid System (ECS) which literally means "the Cannabinoid system inside the body". By regularly supplying our ECS with the nutrients it was designed for, vital communications can be restored between the control centers of the body and every systems.

Due to the persecution of Hemp and Cannabis in the last 80 years, most humans living today have gone their entire lives without feeding their bodies these raw materials. you might imagine it like a large orchestra being made to play blind-folded. They can't see the conductor and they can't read the music. Sometimes they get it right but most of the time it's a mess.

Bringing the body back into harmony could be as simple as replacing this lost nutrition.

4000 Year Old Endocannabioid System - There is one place in the body where there are no Cannabinoid receptors - the brain stem. The brain stem is the control center for the heart and breathing. What this means is that it is not possible for Cannabinoids to overwhelm those systems and cause them to shut down. This is why, in 4000 years no one has ever died from consuming Hemp Cannabinoids.

Disclaimer:
SUNSHINE GLOBAL (SUNSHINE) delivers Hemp Phytocannabinoid-rich blends products that fall under the requirements of the US Hemp Foods specifications. Hemp Foods are sold in all 50 states and roughly 40 Countries. Cannabidiol, a naturally-occurring constituent of the hemp plant, promotes and supports the nutritional health of aging bodies. Source: US Government patent#6,630,507 “Cannabinoids as antioxidants and neuroprotectants.” Cannabidiol is a natural constituent of hemp oil. SUNSHINE does not sell or distribute any products that are in violation of the United States Controlled Substances Act (US CSA). SUNSHINE does sell and distribute industrial hemp-based products. Make sure to check your country's legal status of hemp oil and cannabidiol before ordering with us. We are not liable for knowing the status of hemp cannabidiol extracts in every country. It is your responsibility to know your country's laws before ordering with us. FOOD AND DRUG ADMINISTRATION (FDA) DISCLOSURE: THESE STATEMENTS HAVE NOT BEEN EVALUATED BY THE FDA AND ARE NOT INTENDED TO DIAGNOSE, TREAT, OR CURE ANY DISEASE. ALWAYS CHECK WITH YOUR PHYSICIAN BEFORE STARTING A NEW DIETARY SUPPLEMENT PROGRAM. SUNSHINE makes no healing, curative or medical claims or warranties regarding its products. Reviews left by customers are their own opinion of our products. Their statements are protected by the First Amendment to the Constitution. Some of SUNSHINE High Grade Hemp phytocannabinoid (Cannabidiol) products can contain a blend of phytocannabinoid's. SUNSHINE is capable of supplying a variety of Hempphytocannabinoid blends. Please Contact Us if you have any questions in regards to your purchase and/or needs.