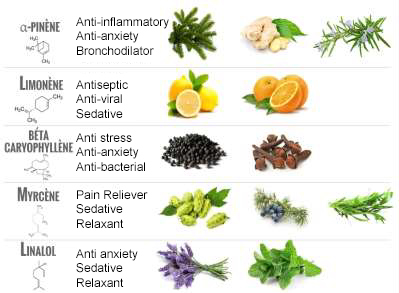 All plants such as fruits, vegetables, and flowers contain an aromatic compound known as terpenes. These molecules have the tendency to evaporate at room temperature and give any plant its unique “scent”. There has been a lot of buzz about terpenes due to a recently discovered human system known as “the endocannabinoid system”, because of their synergy with another molecules known as “cannabinoids”. Cannabinoids are signaling molecules that control our bodies internal systems and having a diet sufficient in terpenes allows these cannabinoids to be carried at a far superior rate and regulate our bodies to a homeostatic rate (balanced rate). In addition, recent studies show that terpenes are also the building blocks of cannabinoids and for this reason offer great medicinal potential.

Hemp, has been found to have many of the terpenes found in various fruits and vegetables. In addition, when applying the essential oil extract of other plants to hemp extracts research has shown significant increase in therapeutic effects. Myrcene is an cannabinoid in cannabis, such as CBD, to bypass the blood brain barrier easier, thus allowing a significantly higher absorption of the cannabinoids.